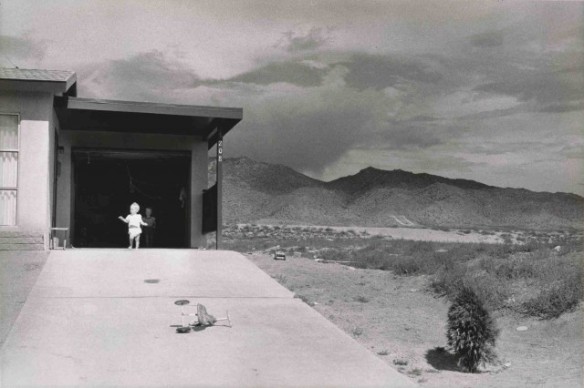 A fascinating account of photographer Garry Winogrand from The Awl:

When he died, of gallbladder cancer in 1984, he left behind more than half a million exposures. Most of them were unedited. Most of them he had never even looked at. Winogrand had always been prolific—but this was something else: three hundred thousand pictures (at a minimum), barely sorted, unorganized, with no indication of why or when they were taken. By most counts their quality didn’t keep up with their quantity. Thousands were botched, “plagued with technical failures—optical, chemical, and physical flaws—in one hundred permutations.” The ones that weren’t tended to be either banal or badly composed, but there were so many of them it was hard to get a read on the whole.

The archive Winogrand left behind was an ocean—trackless, infinite, and unsurveyable—and few had the patience to enter into it. Contemplating its immensity, the curator Alex Sweetman imagined a photographic blob, oozing out of its drawers until it blocked traffic on the entire East Side. Leo Rubinfien, the curator of a new retrospective predicated on the idea that the late work wasn’t all bad, admits to a severe drop off in quality. And even John Szarkowski, Winogrand’s close friend and chief patron, while editing the late work for a posthumous exhibit, found himself feeling first impatient, then angry, and finally convinced that he was the butt of a cruel joke, “designed by the photographer to humiliate him.”

The whole thing is worth reading. I am left wondering: what’s the difference between Winogrand’s work–a seeming anomaly in the era of analog photography–and the “trackless, infinite, and unsurveyable” digital archives we are (almost) all in the process of constructing?