Every couple of years, I teach a course on “Minor Cinemas,” which takes the concept of “minor” literature from Deleuze and Guattari and explores whether/how the concept might be useful for thinking about a range of film practices. When I began teaching the course about six years ago, I included a week on “short cinema,” in which I taught a smattering of advertisements, music videos, and trailers.

END_OF_DOCUMENT_TOKEN_TO_BE_REPLACED 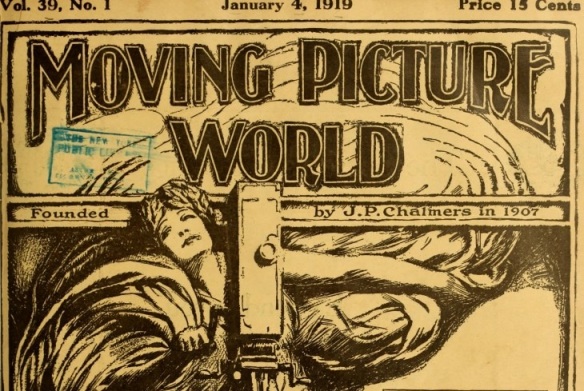 A fantastic new resource for researchers and teachers of early cinema has just appeared online. The first twelve years of Moving Picture World have been digitized and added to the Media History Digital Library’s “Early Cinema Collection.”  From the MHDL:

Moving Picture World was one of the most influential trade papers of the early motion picture industry and the period film historians call cinema’s “transitional era” (lasting roughly from 1908 to 1917). During this era and inside the paper, you can watch the transition from short film programs to feature films and witness the transition from the dominance of Edison’s Trust to the rise of the “Independent” film companies that ultimately became the Hollywood studios.

The first issue includes some “novel uses for cinema,” instructions for making latern slides, a review of The Teddy Bears (Edison, 1907), and a full-page ad from the Miles Brothers (mentioned just last week): “Conversation gets you nothing.  Real Johnny-on-the-spot service is what you want!”

The project was funded, in part, by Domitor and its members.  For those who are interested in contributing, MHDL is still raising funds to digitize MPW through 1927, its last year of publication.

I am organizing a workshop for SCMS 2013.  If you teach early cinema, please consider submitting a proposal: END_OF_DOCUMENT_TOKEN_TO_BE_REPLACED

When the Studio Burned (Lawrence Marston, 1913)

A fictional film about a real fire from a studio that actually burned down.  Thanhouser studios operated in NYC from 1909 to 1918.  It was recently reborn as a non-profit preservation company (directed by the grandchild of the original owner).  More films here and here.

Blaise Cendrars on early cinema.  A glimpse of the interview:

Q: Who are your main characters?

A: Rivers, the forest.

Pete Stollery, a Professor in Composition and Electroacoustic Music at the University of Aberdeen, passed this short piece along to me a few days ago.  It was composed and created by Ross Whyte, a musician and PhD student at the University of Aberdeen, whose research explores “audio-visual intermedia and multi-sensory perception in music.”  You can find Whyte and more of his work here.

The film echoes the woman-on-the-stairs of Leger’s Ballet Mecanique.  But it manages much more than nods to history, the pleasures of found footage, or the ghosts of mechanical reproduction.  Whyte’s use of sound remakes the image(s), brings texture to these early spaces, and plays with the absurdities and excesses hiding just beyond the chase scene.

Smithereens also invites us to spend time with (several kinds of) orphans. I couldn’t help but wonder: Who is this girl?  Where is she going?  Did she ever get there?

This is Len Lye’s first film.  The (great) sound design for this particular version is from Tiantian Zhu.  LUX archive offers this brief description of the project:

“Its title is a Samoan word, suggesting that ‘in the end everything is just the same.’  Len Lye conceived the film as the first of a trilogy of films about ‘the beginnings of organic life.’  Because of lack of finance, parts two and three were never made. Its central motif is the witchetty grub. ‘To get the spirit of the imagery I…imagined I was myself an Australian witchetty grub who was making this animated ritual dance film.’  The whitchetty grub is the totem of a tribe near Alice Springs which considers grubs to be the ancestors of humans. The cocoon-like shape in Tusalava (which Lye has described as ‘a totem of individuality’) can be seen evolving towards human form. Meanwhile, it is menaced by a sharp tongue creature that is “a cross between an octopus and a spider.”

I wish there were a part two and three.

A great collection from the Library of Congress.

This film was shot by Gabriel Veyre, one of the most widely travelled Lumière operators. An online exhibition of his autochromes and films can be found here.

The film poses a number of interesting problems to auteurist celebrations of/engagements with Lumière, including the recent collaboration between Dr. Richard Koeck and the Museum of Liverpool.  Koeck reconstructs Alexandre Promio’s 1897 city stroll with four cinématographes from the Lumière archives. Koeck has sewn these scraps together for a touristic encounter that closely resembles turn-of-the-century Hale’s tours/phantom rides.   For Koeck, these four minutes map both the city of Liverpool and the living, breathing body of a visionary (early) filmmaker.

Although the industrial aspects of the Lumière operation alone would seem to trouble the specificity of Promio and the impulse to create wholes out of its archival fragments, Le Village de Namo presents an altogether different set of visual, bodily challenges to Koeck’s entertaining empiricism.

Whose and how many bodies can we map in this fifty-second sliver?  Must we limit ourselves to the venerable Veyre holding the camera?  Or can we also include the porters who bear his weight?  Koeck invites us to experience four minutes of one day in Liverpool; in “Village de Namo” we can experience fifty seconds of colonial force and human servitude. This film encourages viewers to pivot their perspectives between the porters and the ported, between the body who sees and the bodies who work.

Any and all early film thrills seemingly unite beneath the expansive reach of Gunning’s term.  Against the “temporality of surprise, shock, and trauma,” Gunning opposes the reassuring rhythms of classical narrative film.[i]  He compares the spectator of narrative to Little Hans, a figure who masters the traumatic departure of his mother through the predictable outcomes of his Fort/Da game.  Early cinema, by contrast, is a spool out of control: “If the classical spectator enjoys apparent mastery of the narrative thread of film […] the viewers of the cinema of attractions plays a very different game of presence/absence, one strongly lacking predictability or a sense of mastery,” (5).  Trauma, shock, surprise, the thrills of Coney Island, a single-shot vue, or one of Méliès’ carefully orchestrated screen shows: all equally “smack of the instant.”  The cinema of attractions is a grab bag of visual (and bodily) stimulations as Gunning resists distinguishing between these radically different kinds of early film experiences. END_OF_DOCUMENT_TOKEN_TO_BE_REPLACED