Posting has been slow and infrequent these last couple of weeks, mostly because I am lucky to be on research leave this semester and I have been trying to focus my writing energies elsewhere.  At the moment, I am in the middle of revising a chapter that examines the intersection between ethnographic writing and cinema.  It begins with the following excerpt from Theodore Roosevelt:

I almost always had some volume with me, either in my saddle pocket or in the cartridge-bag which one of my gun bearers carried to hold odds and ends. Often, my reading would be done while resting under a tree at noon, perhaps beside the carcass of a beast I killed, or else waiting for camp to be pitched; and in either case it might be impossible to get water for washings. In consequence the books were stained with blood, sweat, gun oil, dust, and ashes; ordinary bindings either vanished or became loathsome, whereas pigskin merely grew to look as a well-used saddle looks.”

END_OF_DOCUMENT_TOKEN_TO_BE_REPLACED

Many thanks to Matt Lloyd and the organizers of the Glasgow Short Film Festival for organizing a wonderful day of all-things-archive.  The discussion(s) got me thinking in several directions through the archive (financial, physical, digital, conceptual).  My contribution to the discussion after the jump:

END_OF_DOCUMENT_TOKEN_TO_BE_REPLACED

A follow-up to my last post on virtual conferences:

Over the last two to three years, the term “digital humanities” has displaced “interdisciplinarity” as a kind of new bureaucratic buzzword, a rallying cry for administrators under pressure to attract students, make an impact, and embrace the future, whatever that might be.

Anxieties are high among many of those who actually research and teach in the humanities.  What will the digital do to us?  And what can the digital actually do for the humanities?  Does the “digital” have any substance?  For film scholars, the digital poses a number of questions about the boundaries of our discipline, the future of our archives, and the ontology of our beloved objects.

In his most recent piece in the NYTimes, Stanley Fish takes up the term and offers his own skeptical position.  He begins:

END_OF_DOCUMENT_TOKEN_TO_BE_REPLACED 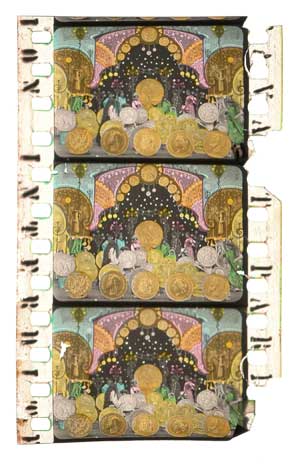 A new film collection has just been introduced.  It stretches from 1897-1944.  It is the product of 11 years of labor; preservation support from Giornate del Cinema Muto and the L. Jeffrey Selznick School of Film Preservation at George Eastman House; and a collaboration between Paolo Cherchi Usai and Joshua Yumibe.

The relationship between this archive and history, early film, and other virtual archives is difficult to describe.  From the website:

This database is a record of the 35mm nitrate film frame clippings collected by Italian film historian Davide Turconi (1911-2005) from the Josef Joye Collection in Switzerland and from other unidentified sources. The collection consists of 23,491 clippings in total (usually two to three frames each). The vast majority of the frames cover the early years of cinema (from ca. 1897 to 1915); however, some items in the collection represent films produced as late as 1944.

Another history here.  The complete clip/fragment collection can be viewed here.  The Turconi Collection (a name that displaces/conceals the layers of collecting/archiving at work) raises a number of important questions for early film historians: what is the value of the (literal) film fragment? What history can we tell with a frame or two, multiplied by 23,491?  What kind of (imaginary, phantom) history does it allow us to write, encouraged perhaps by the dazzling colors of the collection?  The archive sends us down a rabbit hole of historical and archival exchanges: from Cherchi Usai to Turconi to Joye to the anonymous others in-between.  It also sends us to the mirror as we self-reflexively consider the (seemingly limitless) boundaries of the contemporary digital archive.

In honouring “Turconi’s belief that knowledge is a treasure to be shared,” perhaps we can also ask: what kind of knowledge is constituted here?  And what is its relationship to the visual treasure?

Correction: A previous version of this post referred to the Turconi Collection as the “Turconi Archive.”  Nowhere in the project’s description/site materials is this term actually used.

In 2009, the EYE Film Institute invited the public to remix 21 film fragments from the Dutch early cinema collection.  In 2010, Paul D. Miller (aka DJ Spooky) debuted his remix of Dziga Vertov’s Kino-Glaz/Kino-Pravda at the Tate Modern in London.  From Chandler McWilliam’s computer-generated Silent to Ross Whyte’s electroacoustic “glitches,” film’s first decades have been found and reformed online.  These remixes mark the proliferation of digital film archives and video-sharing platforms.  They intervene amid vigorous debates about copyright law, fair-use, and the aesthetic and political possibilities of remix culture.  But these films also raise crucial questions about the affinities between old and new media, early film and contemporary digital culture.  EYE gave the following explanation for their own (institutional) interest in a remix “contest”: END_OF_DOCUMENT_TOKEN_TO_BE_REPLACED

Wading through an (overdue) article revision has taken up a lot of time these last two weeks.  Lifted my head yesterday and came across this fashion spread in the NYT, this blog, and this short film.  Travis Gumbs and Joshua Kissi are the writers / designers / stylists / retailers behind it all.  They are 22 years old and their site receives a breathtaking 20,000 hits per day.  From the NYTimes article on the college students and fashion phenoms:

END_OF_DOCUMENT_TOKEN_TO_BE_REPLACED

Rupture of a Soap Bubble by a Projectile (Lucien Bull, 1904)

What is (film) theory?  Why does it matter?  Over the last year or so, I have had to draft responses to these questions (for students who would rather work on “real” films and colleagues who would rather do “real” history).  Though I am someone who takes pleasure in reading theory, arguments for pleasure (i.e., I enjoy it.  You should, too), or for the pleasures of departure (from “real” disciplinary concerns) are not all that convincing.  A first sketch of another argument:  END_OF_DOCUMENT_TOKEN_TO_BE_REPLACED

“I suddenly wake up in the middle of the night.  The shadows are there, all of them, out there, those from my childhood, and those from books, and particularly those from my dreams.  I get up.  I walk forward on tiptoe.  I chase shadows that disappear, that fade under the electric light, in rooms, bathrooms, through closets, from step to step, in the staircases, under beds, in the corners of curtains…Nothing remains but the house lit up from top to bottom like a screen on which shadows go by […] From that to the cinema, there is only one step.  You can see why I love—why I adore—the movies.  They are the endless play of all shadows, a dream in black and white.”–Josephine Baker [i]

This meditation on shadows and cinema appears in Josephine Baker’s autobiography. END_OF_DOCUMENT_TOKEN_TO_BE_REPLACED

I am rereading the 1994 transcript from the Amsterdam Filmmuseum Workshop on “Non-fiction from the Teens,” kindly given to me by Nico de Klerk during my spring screening visit to the Eye Film Institute.

The opening remarks by Nicola Mazzanti (one of the curators at Il Cinema Ritrovado) resonate in surprising ways with the (many) discussions of digital media we had last weekend at Screen.  Of early non-fiction films, he writes:

“This material provokes a deep crisis in the way you’re used to looking at the material your’re familiar with – at fiction films.  You’ve probably come to the viewing table well organized in your thinking and decision-making.  This material tends to destroy that, tends to pose new questions and impose new kinds of decision-making,” (12).

Although Mazzanti pivots from this crisis to reassert the archive’s questions and historical control (Which film should be saved, should be preserved?), he begins with the disruptive quality of the non-fiction film image, its capacity to overturn the viewer, to elude the reasonable question, and to destroy our historical methodologies.

The initial, radical ambiguities of film seem to have softened.  Or perhaps we have created the appearance of stability in our historiographic approaches.  The digital now operates as simulacrum, while film offers good histories, secure documents, well-behaved copies.  Indeed, in his plenary talk, Jan-Christopher Horak of UCLA argued that “digitisation obliterates history.”

On a different (but perhaps related note): the workshop report is itself a fascinating historical document, carefully preserving a moment in disciplinary history.  It includes the complete workshop schedule, the screening schedule, the list of participants and affiliations, and a transcript of every post-screening discussion.  Tom Gunning (then at Northwestern) and Miriam Hansen (Chicago) spar over their senses of simultaneity. Stefaan Decostere seemingly stuns the empiricists among the crowd with a meditation on melancholy. There is an historiographic method implicit even in ancillary documents such as these. 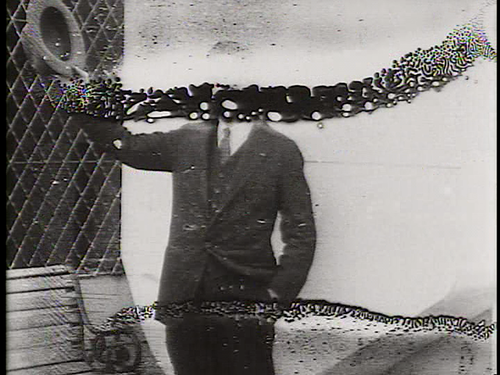 One day left in the Screen 2011 conference.  The theme for this year is “Repositioning Screen History.”  Two days in, I wonder: where are we willing to move our thinking of history and what positions are available to us when we do?  There have been some startling/sharp contributions this year, but the invitation to reposition history seems to have reinvigorated some tired disciplinary positions.  History and real labour on one side, “high theory” and intellectual waste on the other.  Digital anxiety is high, celluloid fetishes abound, model images/origins sought after, 1980s New History approaches perhaps about as radical as we are willing to push/reposition.

I consider film history to be many/multiple and in process (of decay, restoration, remediation).

Digital media is a part of film histories, a site of intersection/exchange, rather than a threat to its recording.

The archive makes (a) film history, as much as it preserves one.

Both the analogue and digital image are fragile, imperfect visual forms.  I (would like to) write with the instability of these media, rather than against or in spite of their eventual obsolescence.

Most depressing conference fact: the UCLA film archive spends $80,000 per month on electricity to cool its film storage units.  We also need a history of film preservation and the environment.

Final thought: the film-as-body figure should be interrogated more carefully.  Film is not a dead/dying fleshy body, the screen is not skin (without some critical/analytical work), etc. The body seems to quietly haunt (some nostalgic, melancholy, anxious) histories.